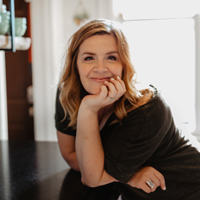 Amber is a StoryBrand certified copywriter and mom. Her goal is to create engaging articles that educate and inspire.

A few years ago, the idea of a fully virtual school felt impossible – but Melissa Vanklompenburg’s team has done the impossible, with flair.

Melissa received her bachelor’s from Calvin College in 2000 with a double major in Science in Art and Geography. During the winter before graduation, Melissa studied architecture abroad in the Netherlands. She spent the time reflecting on how far she’d come and what was ahead. It became clear that although Melissa was intrigued by her studies and enjoyed what she was doing, it wasn’t a calling. She decided to re-enroll with exploratory classes in Education… and never looked back.

Over the years, Melissa served as a long-term substitute, full-time teacher, and led a school improvement team as co-chair. She was nominated twice as teacher of the year at NHA and later selected a fellow for Grand Valley State University, which “changed the trajectory” of her career, steering her toward senior leadership. But it wasn’t until an unexpected cancer diagnosis that virtual learning entered the picture for Melissa. “I needed to step away from work during treatment, so I began to create e-learning development for our leaders because I could do it from home. It grew my muscles in a new way. When the pandemic hit last July, NHA called and said ‘what do you think about leading our virtual instruction for the whole company?’ I was uniquely positioned for the role so I thought, ‘why not?’ My team ended up leading 29,000 students, supporting every principal, and making education happen successfully during a really difficult time. It was all the pieces of the last 18 years coming together at the right time and place.”

This year Melissa is at the helm of PrepNet Virtual and our first micro school here in West Michigan. “The reason I stay with NHA and PrepNet is because we really do ask ourselves at every turn – is this best for kids? Not what is easiest for adults or what is simply popular. We go to great lengths to make it happen, from the structure to our curriculum, we open doors and make changes in kids’ lives that are going to last forever – in the physical and virtual classroom.”
Share
Tags