Larry Jamison’s enthusiasm for teaching has inspired one of his students to become an educator himself.

The second-year PrepNet Virtual Academy seventh-grade English Language Arts teacher uses humor, wears wigs and hats to bring lessons to life, and strives to make the material relevant to students. The passion Jamison has is contagious – one PVA student, Eli, has helped other students during tutoring “power hours” and wants one day to be a teacher himself.

Jamison previously worked at Michigan Math and Science Academy. He was a special needs paraprofessional for a long time, then became a teacher. He said he likes National Heritage Academies’ curriculum as it relates big essential questions and the diversity of the students.

“I feel like we are focused on making sure that the kids are getting the standards, the culture, and the care that they need from us as teachers,” he said. “I’ve been in public schools. The standards, like the common core and all that really isn’t emphasized. I love that part we’re doing.”

Jamison has forged a connection with students in-person as well as in virtual classrooms. Because Eli was the only scholar to earn extra credit work by completing a complicated puzzle for a project, his reward was a field trip to the Immersive King Tut Experience. Eli and his grandmother came from Grand Rapids and Jamison showed them around Detroit, including the art-deco skyscraper Guardian Building. Jamison said Eli was captured by the cathedral-like Guardian Building’s symmetry. 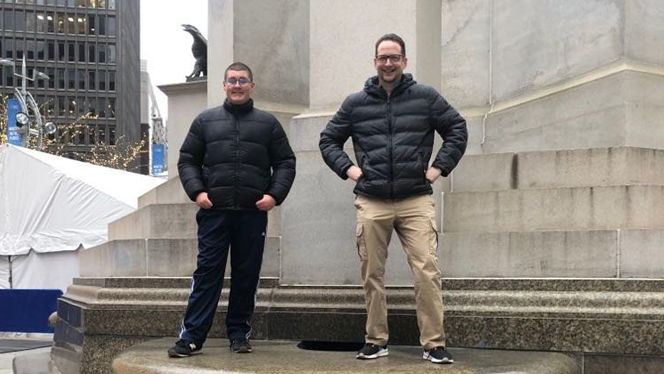 It was a memorable experience for Eli, whom his grandmother said is usually uncomfortable around people he meets for the first time.

“He said that it was like he had known me his whole life,” Jamison said. “He called (his grandmother) into his room about five times just because he had such a great time. He kept wanting to talk about our time down in Detroit.”

Jamison became a teacher later in life, and it suited him because he said he appreciates it more at this age. In his first teaching job, one of his students was a sixth grader who was autistic and had trouble remaining in the classroom. Jamison helped the student by making lessons relevant to him by incorporating SpongeBob and Scooby-Doo into grammar lessons and giving him break times.

Connecting with students like Eli and others drives Jamison each day and will continue into the future.

“There’s students like Eli that you come across that are just one in a million where they're so into learning and also let you know how grateful they are for what you bring to the classroom,” Jamison said. “He’s always letting me know that and it means so much to me. As much as I give to him, he's giving to me. That makes me want to get up in the morning and do my job – students like that.”